For any real number

The following is the graph of the gamma function. It has a U shape. As

, the graph goes up to infinity. As

, the graph increases without bound. As is seen below, the gamma function coincides with the factorial function at the integers. 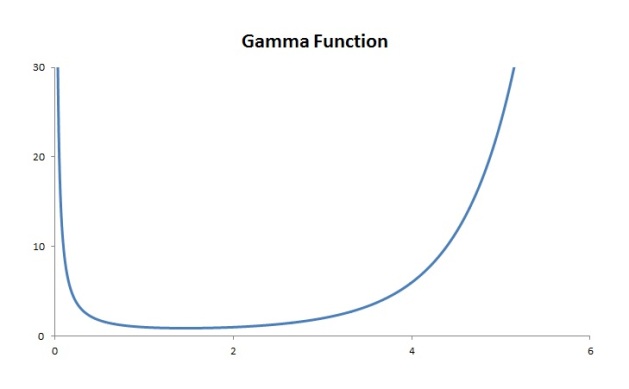 with positive real part. For our purposes at hand, we restrict

to be positive real numbers. Showing that the integral in

converges is important. For example, it will be nice to know that the density function of the gamma distribution sums to 1.0. To show that the integral in

converges, we first make the observation: for some positive real number

This is saying that the quantity

is sufficiently large. This is because the exponential function

increases at a much faster rate than the polynomial function

. Then multiply both sides of

to obtain the following:

Now, break up the interval in

A basic fact. For any continuous function

defined over a closed interval

of finite length, the integral

exists and has a finite value. As a result, the first integral in

exists. So we just focus on the second integral.

is used. Due to

, the second integral in

is finite. With both integrals in

finite, it follows that the improper integral in the definition of

The gamma function is a well known function in mathematics and has wide and deep implications. Here, we simply state several basic facts that are needed. In the discussion here, One useful fact is that the gamma function is the factorial function shifted down by one when the argument

is derived by using integration by parts. It is clear from definition that

. By an induction argument,

for all integers greater than 1.

and so on. Given that

, the recursive relation tells us that

and so on. The above recursive relation can be further extended:

When the integral in

9 thoughts on “Introducing the gamma function”