), the density function is

and the rate parameter

. Another parametrization uses the scale parameter

. For now we stick with the rate parameter

because of the connection with the Poisson process discussed below. The exponential distribution is simply a gamma distribution when

. Immediately the properties of the gamma distribution discussed in the previous post can be transferred here. Suppose that

. Immediately we know the following. 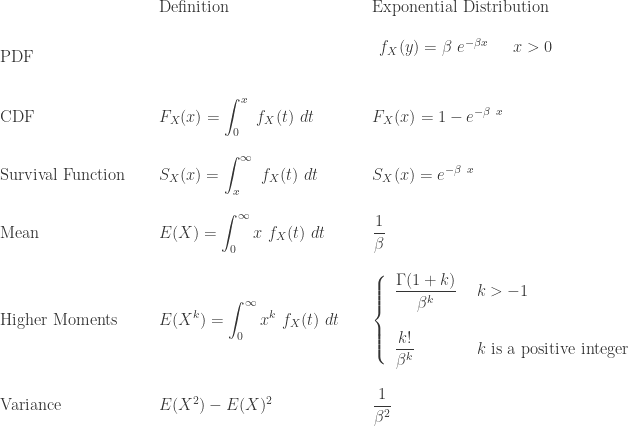 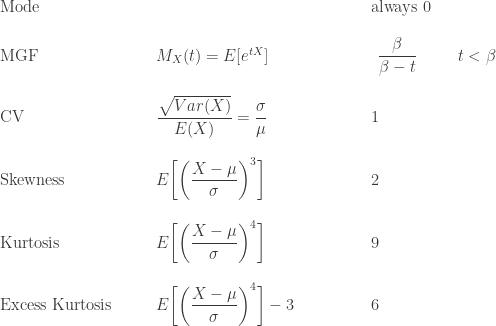 The above items are obtained by plugging

into the results in the post on gamma distribution. It is clear that exponential distribution is very mathematically tractable. The CDF has a closed form. The moments have a closed form. As a result, it is possible to derive many more properties than the ones shown here.

No discussion on the exponential distribution is complete without the mentioning of the memoryless property. Suppose a random variable

has support on the interval

holds for all positive real numbers

. To get an appreciation of this property, let’s think of

as the lifetime (in years) of some machine or some device. The statement in

says that if the device has lived at least

years, then the probability that the device will live at least

years. It is as if the device does not remember that it has already been in use for

years. If the lifetime of a device satisfies this property, it does not matter if you buy an old one or a new one. Both old and new have the same probability of living an additional

years. In other words, old device is as good as new.

Since the following is true,

is equivalent to the following:

says that the survival function of this distribution is a multiplicative function. The exponential distribution satisfies this property, i.e.

On the other hand, any continuous function that satisfies the multiplicative property

is distributed identically as the unconditional random variable

. This means the conditional variable

shares the same survival function as the original random variable

, hence sharing the same cumulative distribution and the same density function and so on.

The memoryless property, anyone of the three statements, is a striking property. Once again, thinking of

as the lifetime of a system or a device. The conditional random variable in statement

is the remaining lifetime for a device at age

says that it does not matter how old the device is, the remaining useful life is still governed by the same probability distribution for a brand new device, i.e. it is just as likely for an old device to live

more years as for a new device, and that an old device is expected to live as long as a new device.

Example 1
Suppose that a bank has two tellers serving retailed customers that walk into the bank lobby. A queue is set up for customers to wait for one of the tellers. The time between the arrivals of two consecutive customers in the queue has an exponential distribution with mean 3 minutes. The time each teller spent with a customer has an exponential distribution with mean 5 minutes. Assume that the service times for the two tellers are independent. At 12:00 PM, both tellers are busy and a customer has just arrived in the queue.

be the waiting time between two consecutive customers and

be the service time of a bank teller, both in minutes. The answers for Part 1 are

Part 2 involves the memoryless property. The answer is:

Part 3 also involves the memoryless property. It does not matter how long each server has spent with the customer prior to 1:00 PM, the remaining service time after 1:00 PM still has the same exponential service time distribution. The answers are:

Example 2
Suppose that times between fatal auto accidents on a stretch of busy highway have an exponential distribution with a mean of 20 days. Suppose that an accident occurred on July 1. What is the probability that another fatal accident occurred in the same month? If the month of July were accident-free in this stretch of highway except for the accident on July 1, what is the probability that there will be another fatal accident in the following month (August)?

be the time in days from July 1 to the next fatal accident on this stretch of highway. Then

is exponentially distributed with a mean of 20 days. The probability that another fatal accident will occur in the month of July is

For clarity, the example is first discussed using

is the mean of the exponential damage and

is the deductible. Let

be the amount of the damage of an auto accident. Let

be the amount paid by the insurance policy per accident. Then the following is the rule for determining the amount of payment.

With this payment rule,

can be worked out based on the exponential random variable

for the damage amount as follows:

Because the exponential distribution is mathematically very tractable, the mean

are very doable. Indeed the above integrals are excellent exercise for working with exponential distribution. We would like to demonstrate a different approach. Because of the memoryless property, there is no need to calculate the above integrals.

is a mixture. Specifically it can be one of two possibilities. With probability

is an exponential random variable,

is distributed identically as the original damage amount

. Thus the mean of

, is the weighted average of

is also a weighted average. The following shows how to calculate the first two moments of

The second moment of the random variable

. The variance of the insurance payment

Using the memoryless property and the fact that the insurance

is a mixture requires less calculation. If the damage amount

is not exponential, then we may have to resort to the direct calculation by doing the above integrals.

The Unique Distribution with the Memoryless Property

Now we show that exponential distribution is the only one with the memoryless property. First establish the fact that any right continuous function defined on

must be an exponential function. The statement that

is a right continuous function means that if

be a right continuous function that is defined on

such that it satisfies the functional relation

for any positive integers

Note that for any positive integer

. It follows that for any positive integer

. On the other hand,

. To see this, note that

. Raising both sides to

gives the claim. Combining these two claims give the fact stated above. We have established the fact that

for any positive rational number

Next, we show that

be a sequence of rational numbers converging to

from the right. Then

. By the above fact,

. On the other hand,

is an exponential function with base

is desired as a base,

be the survival function of the random variable

. So the survival function

must be an exponential function, the survival function

must be an exponential function. Thus

is an exponential random variable. This establishes the fact that among the continuous distributions, the exponential distribution is the only one with the memoryless property.

11 thoughts on “The exponential distribution”