Suppose that a multinomial experiment can result in

distinct outcomes. Suppose that the experiment is performed two times with the two samples drawn from two different populations. Let

. Furthermore, suppose that there are

independent multinomial trials in the first experiment and the second experiment, respectively.

and the random variables

. Then the sampling distribution of each of the following

has an approximate chi-squared distribution with

degrees of freedom (discussed here). Because the two experiments are independent, the following sum

has an approximate chi-squared distribution with

degrees of freedom. When

, are unknown, we wish to test the following hypothesis.

. How do we do that? If the null hypothesis

is true, then the two independent experiments can be viewed as one combined experiment. Then the the following ratio

is the sample frequency of the event corresponding to cell

. Furthermore, we only have to estimate

since the estimator of

. With all these in mind, the following is the test statistic we will need.

parameters are estimated, the degrees of freedom of this test statistic is obtained by subtracting

. Thus the degrees of freedom is

. We test the null hypothesis

against all alternatives using the upper tailed chi-squared test. We use two examples to demonstrate how this procedure is done.

Example 1
A Million Random Digits with 100,000 Normal Deviates is a book with random numbers published by the RAND Corporation in 1955. It contains 1,000,000 random digits and was an important work in statistics and was used extensively in random number generation in the 20th century. A typical way to pick random numbers from the book is to randomly select a page and then randomly select a point on that page (row and column). Then read off the random digits from that point (going down and then continue with the next columns) until obtaining the desired number of digits. We selected 1,000 random digits in this manner from the book and compare them with the random digits generated in Excel using the Rand() function. The following table shows the frequency distributions of the digits from the two sources. In the following table, MRD = Million Random Digits. Test whether the distributions of digits are the same between MRD and Excel. 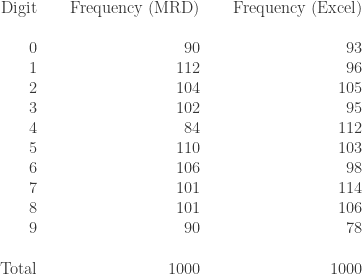 The frequencies of the digits are for the most part similar between MRD and Excel except for digits 1 and 4. The null hypothesis

is that the frequencies or probabilities for the digits are the same between the two populations. The following is a precise statement of the null hypothesis.

is the probability that a random MRD digit is

is the probability that a random digit from Excel is 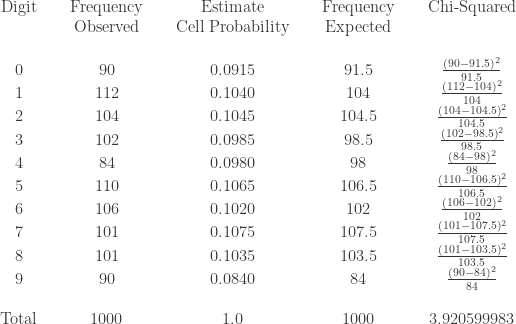 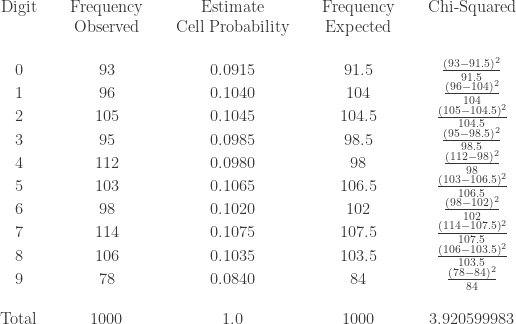 , the critical value (the upper area of the chi-squared density curve) is 16.9. Thus we do not reject the null hypothesis that the distributions of digits in these two sources of random numbers are the same. Given the value of the chi-squared statistic (7.84), the p-value is 0.55. Since the p-value is large, there is no reason to believe that the digit distributions are different between the two sources.

To ensure that the expected count in the last cell is not too small, we collapse two cells (4 and 5 accidents) into one. The following two tables show the calculation for the chi-squared procedure.

The total value of the chi-squared statistic is 15.1258 with df = 4. At level of significance

The procedure demonstrated in the previous section can be easily extended to handle more than two distributions. Suppose that the focus of interest is a certain multinomial experiment that results in

distinct outcomes. Suppose that the experiment is performed

times with the samples drawn from different populations. The

iterations of the experiment are independent. Note the following quantities.

is the probability that the outcome in the

th experiment falls into the

is the number of times the

is the number of trials in the

With these in mind, consider the following chi-squared statistics

. Each of the above

statistic has an approximate chi-squared distribution with

degrees of freedom. Since the experiments are independent, the sum of all these chi-squared statistics

has an approximate chi-squared distribution with df =

. The null hypothesis is that the cell probabilities are the same across all populations. The following is the formal statement.

. The unknown cell probabilities are to be estimated using sample data as follows:

is true, then the

iterations of the experiment is just one large combined experiment. Then

is simply the number of observations that fall into cell

is assumed to be true. Thus

is an estimate of the cell probabilities

to obtain the following chi-squared statistic.

Since we only have to estimate the cell probabilities

, the degrees of freedom of the above statistic is

Once all the components are in place, we obtain the critical value of the chi-squared distribution of the df indicated above with an appropriate level of significance to decide on the rejection or acceptance of the null hypothesis. The p-value approach can also be used.