The preceding post introduces the notions of value-at-risk (VaR) and tail-value-at-risk (TVaR). These are two particular examples of risk measures that are useful for insurance companies and other enterprises in a risk management context. For

, VaR at the security level

. Thus in our context VaR is a percentile of the loss distribution. TVaR is a conditional expected value. At the security level

, TVaR is the expected value of the losses given that the losses exceed the threshold VaR.

The comparison is with formula (3) in the preceding post. That formula shows that TVaR is

. In other words, TVaR is VaR plus the mean excess loss function evaluated at

. The content within the squared brackets in Formula (a) is a weighted average of the two individual mean excess loss functions with the adjustment of multiplying with the probabilities

. This formula is useful if the

(VaR) can be calculated and if the mean excess loss functions are accessible.

We give an example and then show the derivation of Formula (a).

First, calculate the 99th percentile of the mixture, which is the solution to the following equation.

, we solve the following equation.

Use the quadratic formula to solve for

. The following is the 99th percentile of the loss

The following gives the TVaR.

Note that the mean excess loss for the first exponential distribution is 5 and for the second one is 10 (the unconditional means). The survival functions

are also easy to evaluate. As long as the percentile

of the mixture is calculated, the formula is very useful. In this example, the two exponential parameters are set so that the calculation of percentiles uses the quadratic formula. If the parameters are set differently, then we can use software to evaluate the required percentile.

is the mixture of

. The density function for

and the density function for

. The density function of

. We derive from the basic definition of TVaR. Let 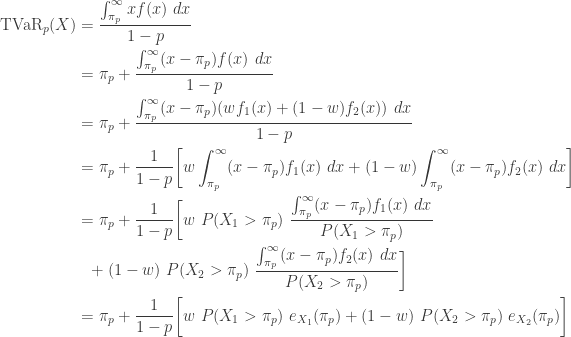 The formula derived here is for mixtures for two distributions. It is straightforward to extend it for mixtures of any finite-mixture.

Practice problems are available in the companion blog to reinforce the concepts of value-at-risk and tail-value-at-risk. Practice Problems 10-G and 10-H in that link are for TVaR of mixtures.

3 thoughts on “Tail-value-at-risk of a mixture”