The Goodness-of-Fit Test and the Test of Homogeneity

The three interpretations of the chi-squared test have been discussed in these posts: goodness-of-fit test, test of homogeneity and test of independence.

The three different uses of the test as discussed in the three previous posts can be kept straight by having a firm understanding of the underlying experimental design.

cells. Then there would be

observed counts. The expected counts for the

cells would come from an hypothesized distribution of the categorical variable. The chi-squared statistic is then the sum of

As a quick example, we may want to answer the question whether a given die is a fair die. We then observe

rolls of the die and classify the rolls into 6 cells (the value of 1 to 6). The null hypothesis is that the values of the die follow a uniform distribution. Another way to state the hypothesis is that each cell probability is 1/6. Another example is the testing of the hypothesis of whether the claim frequency of a group of insured drivers follows a Poisson distribution. The cell probabilities are then calculated based on the assumption of a Poisson distribution. In short, the goodness-of-fit test is to test whether the observed counts for one categorical variable come from (or fit) a hypothesized distribution. See Example 1 and Example 2 in the post on goodness-of-fit test.

In the test of homogeneity, the calculation of the chi-squared statistic would involve adding up the squared differences of the observed counts and expected counts for the multiple samples. For illustration, see Example 1 and Example 2 in the post on test of homogeneity.

The test of independence can be confused with the test of homogeneity. It is possible that the objectives for both tests are similar. For example, a test of hypothesis might seek to determine whether the proportions of smoking statuses (current smoker, former smoker and never smoker) are the same across the groups with different education levels. This sounds like a test of homogeneity since it seeks to determine whether the distribution of smoking status is the same across the different groups (levels of educational attainment). However, a test of independence can also have this same objective.

An experimenter using a test of independence might try to answer the same question but is proceeding in a different way. The experimenter would sample the individuals from a given population and observe two categorical variables (e.g. level of education and smoking status) for the same individual.

Then the researchers would classify each individual into a cell in a two-way table. See Table 3b in the previous post on test of independence. The values of the level of education go across the column in the table (the column variable). The values of the smoking status go down the rows (the row variable). Each individual in the sample would belong to one cell in the table according to the values of the row and column variables. The two-way table is to help determine whether the row variable and the column variable are associated in the given population. In other words, the experimenter is interested in finding out whether one variable explains the other (or one variable affects the other).

For the sake of ease in the discussion, let’s say the column variable (level of education) is the explanatory variable. The experimenter would then be interested in whether the conditional distribution of the row variable (smoking status) would be similar or different across the columns. If the conclusion is similar, it means that the column variable does not affect the row variable (or the two variables are not associated). This would also mean that the distribution of smoking status are the same across the different levels of education (a conclusion of homogeneity).

The test of independence and the test of homogeneity are based on two different experimental designs. Hence their implementations of the chi-squared statistic are different. However, each design can be structured to answer similar questions.

It is clear from both tables that most of the deaths were either men or third class passengers. This observation is not surprising because of the mentality of “Women and Children First” and the fact that first class passengers were better treated than the other classes. Thus we can say that there is an association between gender and survival and there is an association between passenger class and survival in the sinking of Titanic. More specifically, the survival rates for women and children were much higher than for men and the survival rates for first class passenger was much higher than for the other two classes.

When a study measures two categorical variables on each individual in a random sample, the results can be summarized in a two-way table, which can then be used for studying the relationship between the two variables. As a first step, joint distribution, marginal distributions and conditional distributions are analyzed. Table 1 is analyzed in here. Table 2 is analyzed here. Though the Titanic survival data show a clear association between survival and gender (and passenger class), the discussion of the Titanic survival data in these two previous posts is still very useful. These two posts demonstrate how to analyze the relationship between two categorical variables by looking at the marginal distributions and conditional distributions.

We demonstrate the test of independence by working through the following example (Example 1). When describing how the method works in general, the two-way table has

columns (not including the total row and the total column).

Example 1
The following table shows the smoking status and the level of education of residents (aged 25 or over) of a medium size city on the East coast of the United States based on a survey conducted on a random sample of 1,078 adults aged 25 or older. 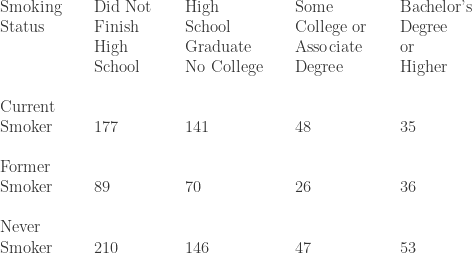 The two categorical variables in this example are smoking status (current, former and never smoker) and level of education (the 4 categories listed in the columns in Table 3). The researcher views level of education as an explanatory variable and smoking status as the response variable. Table 3 has 3 rows and 4 columns. Thus there are 12 cells in the table. It is helpful to obtain the total for each row and the total for each column.

Table 3a – Smoking Status and Level of Education 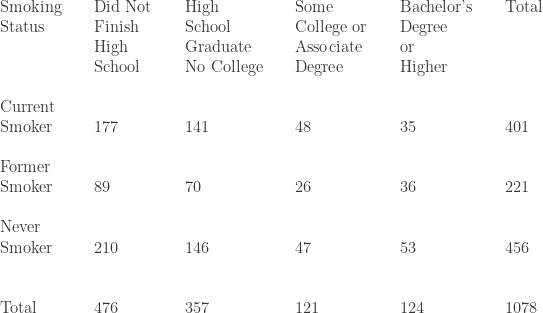 Our goal is to use the chi-squared statistic to evaluate the data in the two-way table. The chi-squared statistic is based the squared difference between the observed counts in Table 3a and the expected counts derived from assuming the null hypothesis. The following shows how to calculate the expected count for each cell assuming the null hypothesis.

in the denominator is the total number of observations in the two-way table. For Table 3a,

Table 3b – Smoking Status and Level of Education 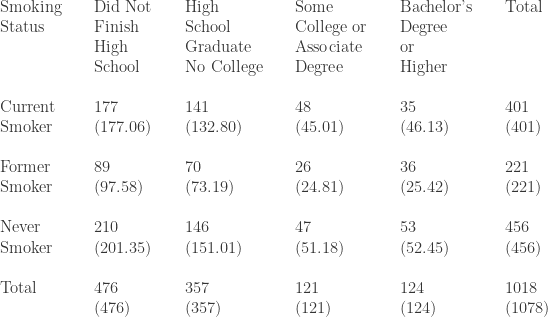 The sum in the formula is over all

cells in the 2-way table where

is the number of rows and

If the null hypothesis

degrees of freedom. Recall that

is the number of rows and

is the number of columns in the two-way table (not counting the total row and total column).

is rejected if the value of the chi-squared statistic exceeds the critical value, which is the upper tail in the chi-squared distribution (with the appropriate df) of area

(i.e. level of significance). The p-value approach can also be used. The p-value is the probability that the chi-squared random variable under the assumption of

is more extreme than the observed chi-squared statistic.

0.05, the critical value is 12.59. Thus the chi-squared statistic is not large enough to reject the null hypothesis. So the sample results do not provide enough evidence to conclude that smoking status is affected by level of education.

The p-value is 0.1412. Since this is a large p-value, we have the same conclusion that there is not sufficient evidence to reject the null hypothesis.

Both the critical value and the p-value are evaluated using the following functions in Excel.

Use the chi-squared test as described above to test whether political affiliation is affected by race and ethnicity.

The following table show the calculation of the expected counts (in parentheses) and the total counts.

Table 4a – Race/Ethnicity and Political Affiliations

The value of the chi-squared statistic, computed in Excel, is 18.35, with df = (3-1) x (4-1) = 6. The critical value at level of significance 0.01 is 16.81. Thus we reject the null hypothesis that there is no relation between race/ethnicity and political party affiliation. The two-way table provides evidence that political affiliation is affected by race/ethnicity.

The p-value is 0.0054. This is the probability of obtaining a calculated value of the chi-squared statistic that is 18.35 or greater (assuming the null hypothesis). Since this probability is so small, it is unlikely that the large chi-squared value of 18.35 occurred by chance alone.

One interesting point that should be made is that the chi-squared test of independence does not provide insight into the nature of the association between the row variable and the column variable. To help clarify the association, it will be helpful to conduct analysis using marginal distributions and conditional distributions (as discussed here and here for the Titanic survival data).

Some students may confuse the test of independence discussed here with the chi-squared test of homogeneity discussed in this previous post. Both tests can be used to test whether the distributions of the row variable are the same across the columns.

Bear in mind that the test of independence as discussed here is a way test whether two categorical variables (one on the rows and one on the columns) are associated with one another in a population. We discuss two examples here – level of education and smoking status in Example 1 and race/ethnicity and political affiliation in Example 2. In both cases, we want to see if one of the variable is affected by the other variable.

For the test of independence to be used, the observational units are collected at random from a population and two categorical variables are observed for each unit. Hence the results will be summarized in a two-way table. For the test of homogeneity, the data are collected by random sampling from each subgroup separately. If Example 2 is to use a test of homogeneity, the study would have to sample each racial group separately (say 1000 white, 1000 blacks and so on). Then we compare the proportions of party affiliations across racial group. For Example 2 to work as a test of independence as discussed here, the study would have to observe a random sample of adults and observe the race/ethnicity and party affiliation of each unit.

Another chi-squared test is called the goodness-of-fit test, discussed here. This test is a way of testing whether a set of observed categorical dataset come from a hypothesized distribution (e.g. Poison distribution).

All three tests use the same chi-squared statistic, but they are not the same test.